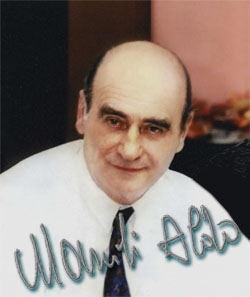 Aldo Marsili, the founder of the company and father of the current managing director/owner, started his career in his uncles’ workshop, with the first agricultural engines, and in the water sector designed a neighborhood fountain with a lever mechanism.

The advent of the first engines on fishing boats, gave a more effective incisiveness to the young Marsili Aldo, who was in charge of the assembly and testing of the engines on the fishing boats.

This work made him become well known to many people of the sea, who  respected him as a tireless and reliable technician, his life motto was “we must collaborate with everybody” so that he showed an interest in other onboard equipment, one of these being the steering system.

His boat owner friends told him “… at the helm we struggle too much and having to be at the manual tiller arm does not allow us to easily follow the fishing operations, it seems that we need another person onboard.”
Marsili Aldo was also an avid reader and often went to work in other ports, and he was aware of hydraulics used in steering systems.

Destiny have it – in the mid 50’s a friend of his on a fishing trip, pulled in the nets and brought to light from the bottom of the sea a waterproof sea chest, that contained many books that spoke of submarine hydraulic systems. They were given to Aldo, who had them translated and little by little he read and studied them all, in the basement of his father’s house, and at the end of his working day he would experiment with the aid of diagrams from the books, and verified personally what was written.

The same basement, which in 1957 saw the creation of the Marsili Hydraulics Civitanova Marche, thus starting the production of hydraulic steering systems (Steering Gear System) for fishing vessels, and in those years they were all mechanical.

By using the site, you accept the use of cookies on our part. more information

This site uses cookies to provide the best browsing experience possible. By continuing to use this site without changing your cookie settings or clicking on "Accept" you allow their use.